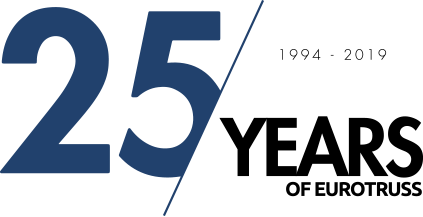 The Chatsworth Estate opened its doors and its grounds to the Royal Horticultural Society in June for a new show with a style and content unlike any of its existing events. Running from the 7-11 of June the estate, which is home to the Duke and Duchess of Devonshire, set out to take on the likes of Chelsea, Tatton Park and Hampton Court to offer visitors an immersive horticultural event experience.

The show’s overarching theme was ‘Design Revolutionaries’ and celebrated not only the creative genius of gardeners and garden designers of the past, such as Joseph Paxton, who was the estate’s Head Gardener, but also the talent and innovative thinking of today’s generation of designers.

But perhaps, just as worthy of the ‘Design Revolutionaries’ title, are the designers ofThe Great Conservatory in honour of Paxton’s original Great Conservatory built in 1840 and demolished in 1920. Far from the intricate glass structure which stood proudly in the estate’s grounds for 80 years, its reincarnation is an impressive inflatable dome expertly constructed by Unusual Rigging in collaboration with Inflate, who designed and created it to replicate the look of the old conservatory.

Nick Mattingley, RHS Director of Shows, has a long history of working with Unusual Rigging – originally collaborating on the first British Military Tournament in 2010, when he brought Unusual on board to supply an internal frame and rigging system to ‘fly’ an inflatable Chinook into the Earls Court arena. He said: “My relationship with the team at Unusual Rigging has strengthened over the last seven years – delivering some amazing projects for the British Military Tournaments. Knowing full well that the Unusual team is never one to turn down a challenge involving the weird and wonderful, they were obviously my first port of call for this particular job.”

While this project is certainly unique in Unusual Rigging’s portfolio, it joins a showcase of other spectacular and (some might say) off-the-wall projects the company often finds itself involved with. It’s not every day that you are asked to help fly a Star Wars X-Wing as part of a bigger project for Secret Cinema,or to design and rig death defying experiments on ITVs It’s Not Rocket Science or the weekly Ant vs Dec challenges on Saturday Night Takeaway, to list just a few high profile projects.

Nick started talks with Unusual and Inflate towards the end of 2016 with Unusual briefed to provide an internal structure for a giant inflatable dome. Following several meetings and site visits, the resulting design is an impressive 21m x 21m x14m truss structure to support the inflatable, taking into account the substantial wind loads and forces that it could be subjected to. The structure boasts eight legs – each requiring 18 tonnes of resistance per leg. “Normally this would be achieved using ballast,” explained Jim Dugan, production manager at Unusual Rigging. “But because of the nature of the site and the way the structure is being used, we used Platipus ground anchors to provide the resistance. That’s not including any of the resistance required around the edge of the inflatable – an additional 100 tonne is needed for this.”

“We enlisted the services of Eurotruss to design and manufacture a number of bespoke elements as well as to provide as many standard sections as possible”, explained Jim

Working with Unusual Rigging on these challenging projects is an absolute pleasure, their knowledge and professional approach in combination with their speed of working is key for the client and for us as a manufacturer to grant all parties involved enough time to properly work out the ideas and designs. Eurotruss is really proud to have such a reliable partner in the UK who is able to convert client ideas into realization and make sure the result is always beyond client expectations

The installation took place over five days at the end of May, with the help of a 100 tonne crane and a 35 tonne crane. Robin Elias, technical director at Unusual, commented: “We love a challenge and this project was full of them from start to finish. Firstly we had to find a truss system that could be built in a very short time scale which was fit for purpose, but most importantly fulfil the rigorous wind calculations. The next challenge involved assembling a brand new system that was delivered direct to site. We also had to factor in the various inflatable skins supplied by Inflate which again, like our truss system, arrived directly to site without pre-fitting. In essence, there was no dress rehearsal and bearing in mind how colossal the structure is, we had our work cut out and our breaths held, although to a large extent we’re used to these sorts of challenges now, so they don’t really faze us.”

While the weather during week of the show itself was extremely wet and windy, the weather conditions during the build lent themselves to the craning and complex lifts, which was where the main challenge lay. Robin continued: “The lifts happen at various stages and while the structure is anchored securely to the ground once the build is complete, it wasnot secured to the ground during assembly and so timing the lifts and the fixings to suit the wind conditions was absolutely crucial. Luckily our crew chief Jason White took care of it all and ensured a successful installation ahead of the show.”

Nick added: “Against all odds, Unusual completed the building on time and everyone commented on just how fantastic it looked. More importantly for us however is that the structural integrity of the Great Conservatory was proven by the high winds – so high in fact, that on the preview day the show had to be closed. However, not only did the inflatable stand up to the test, but the internal infrastructure remained unaffected by the punishing effects of the storm. My colleague David Edwards and I had a commanding view of the site from the hills while the storm blew and had fears of the structure untethering and sailing by like a UFO – but thanks to Unusual, it did not.”

Jim concluded: “We worked closely with the structural engineers to prepare for the worst the elements could potentially throw at the structure – and on this occasion Mother Nature didn’t disappoint – the structure was battered by torrential rain, gale force winds – the lot!” It will be rebuilt annually at Chatsworth for the next five years – so hopefully it’s been put through its paces in year one.” 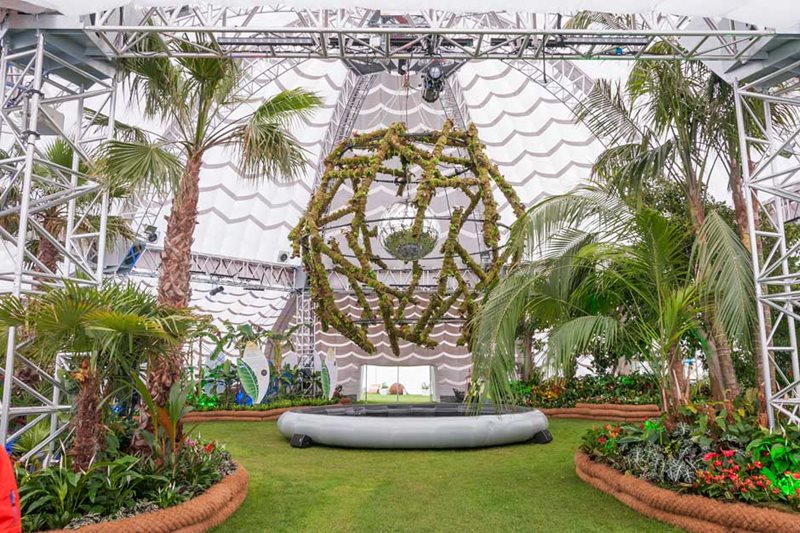 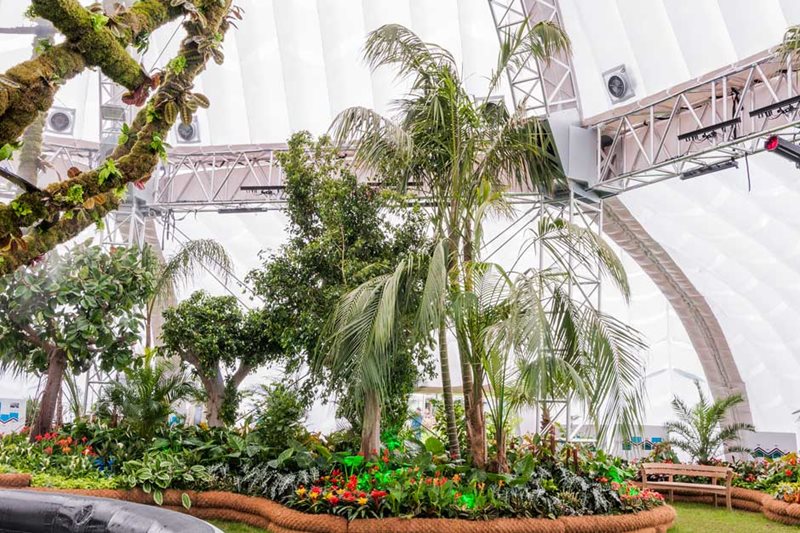 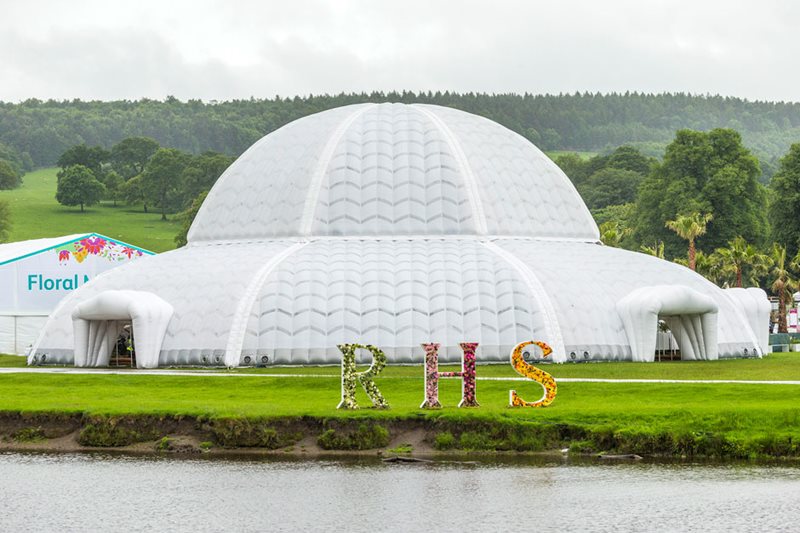 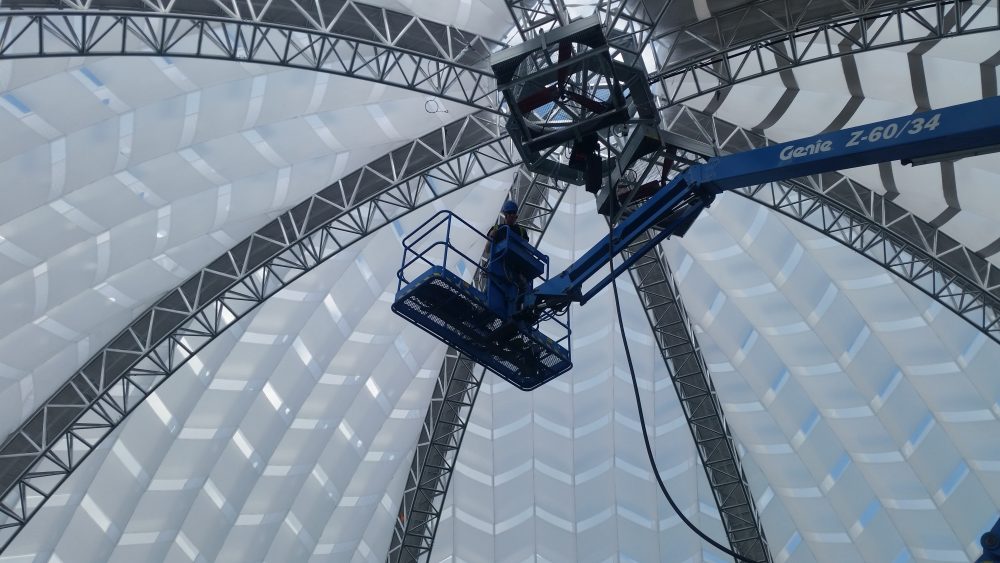 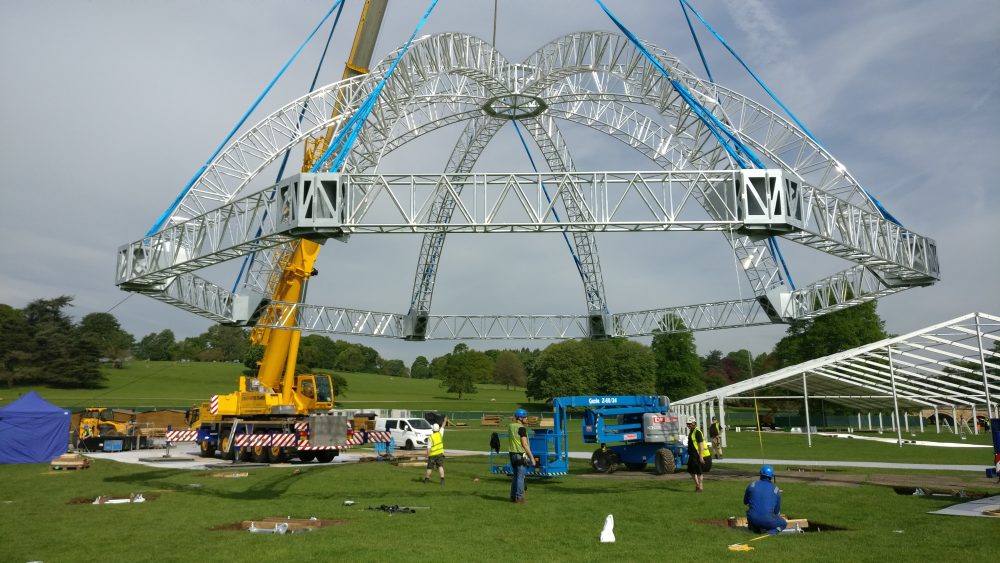 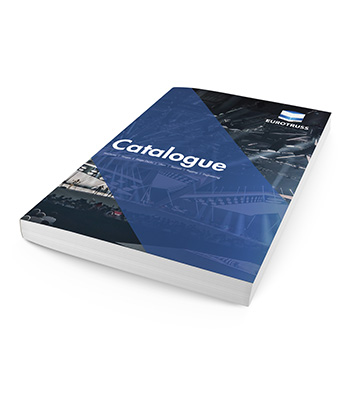